MoMA at NGV: 130 Years of Modern and Contemporary Art

One thing I look forward to each year is NGV’s Melbourne Winter Masterpieces. This time, NGV partnered with MoMA to bring their famous pieces to Melbourne. The exhibition consists of 200+ pieces and includes artworks from iconic artists such as Kahlo, Picasso, Pollack and Duchamp (#WarFlashbacksToEssaysOnDadaism). I’ve been looking forward to this exhibition ever since it was announced back in May!

I went with a best friend on a Wednesday noon a few weeks after the opening. The ticket queues of past exhibitions such as Van Gogh, Ai Weiwei x Warhol and Degas couldn’t even compare to MoMA’s. We queued for a good hour before (unfortunately) remembering we live in the age of technology and NGV offers online tickets. I guess it was time well spent on practising patience?? So if you’re planning to go for a visit during peak hours or will be on a tight schedule, I recommend buying tickets online if you don’t mind the $4.50 booking fee (per transaction, luckily not per ticket). 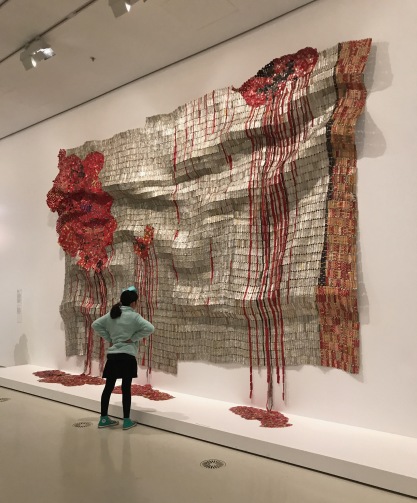 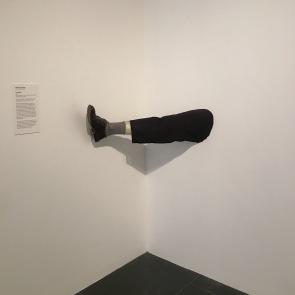 The exhibition follows a chronological order, starting from the early twentieth century through to the twenty first century. The works in this exhibition also span across different media, ranging from photography to painting to architecture. They mark a turning point in Western art history, diverging from traditional art.

The common theme seemed to be development: the radicalisation and transformations in art that reflected societal and technological changes, mirroring the effects of modernity. More specific themes such as internal landscapes, machinery, identity and cultural norms are also touched on. Of course, several different modern art movements like Pop Art and Cubism are included; so vastly different yet similar in their revolutionary visual language. I think it’s a pretty good variety, though if you’re more into movements like the Renaissance, this might not be your cup of tea. The Portrait of Joseph Roulin is probably the closest you’re gonna get to that… And personally, I think this isn’t the most immersive experience NGV has offered. Nonetheless, I still think it’s a exhibition worth seeing, if not only to see Dali’s The Persistence of Memory (it’s a lot smaller than I imagined)!

My favourite section was Things as They Are; lots of pop culture and a good dose of commentary on the culture of consumerism and commodity. You’re probably able recognise at least one of the works here. Warhol’s Marilyn Monroe was popular with the viewers, all trying to get a good shot.

Lichtenstein’s melodramatic Drowning Girl was also a focal point (Has anyone figured out who Brad is? Is he really her bae? What did he do to her??). I saw her when I went to MoMA in New York back in 2017. She was tucked away, placed facing an elevator. Personally, it’s interesting to see the same work placed in different locations (halfway around the globe in this case). It raises the question of artworks adapting to exposition spaces and vice versa.  The issue of galleries acting as neutral frames or not. Perhaps displaying works in situ (although the ivory tower of production has its own paradoxes) would avoid these issues and manipulations in transitions, but that’s a discussion for another time.

Not to be one of those #salty people but… I saw too many people simply there to take a photo and move on. Sometimes I think we view famous artworks as products placed on a high pedestal, coveted around the world, something to see, to be ticked off on a list and not really seen. Try to slow down, take a closer look. Peek closer to see the individual ben-day dots on the Drowning Girl! Get a closer look at Van Gogh’s brush strokes! At Matisse’s signature, hiding just above the frame. It’s a different perspective that creates an intimacy between the work and viewer. It’s oddly humbling for me to see effort, intention and the care an artist had-  something before me despite the passing of time and distance.

Anyways, I won’t bore you with my musings anymore. The space of the exhibition was organised nicely, taking up the entire ground floor of the gallery. There’s also an interactive artwork: a room where the participants can get their heights measured and recorded on the white walls. It creates an interesting pattern – names cluttered across the walls like little ants. Maybe you can spot a friend’s name if you look close enough!

Good news if you’re an NGV member: this exhibition is free. Yep, free in celebration of the exhibition. Even if you’re not a member and it’s a rainy Melbourne day and you’re stuck at what to do indoors – I definitely suggest coming here to spend an afternoon amongst works from some of the world’s most famous artists.